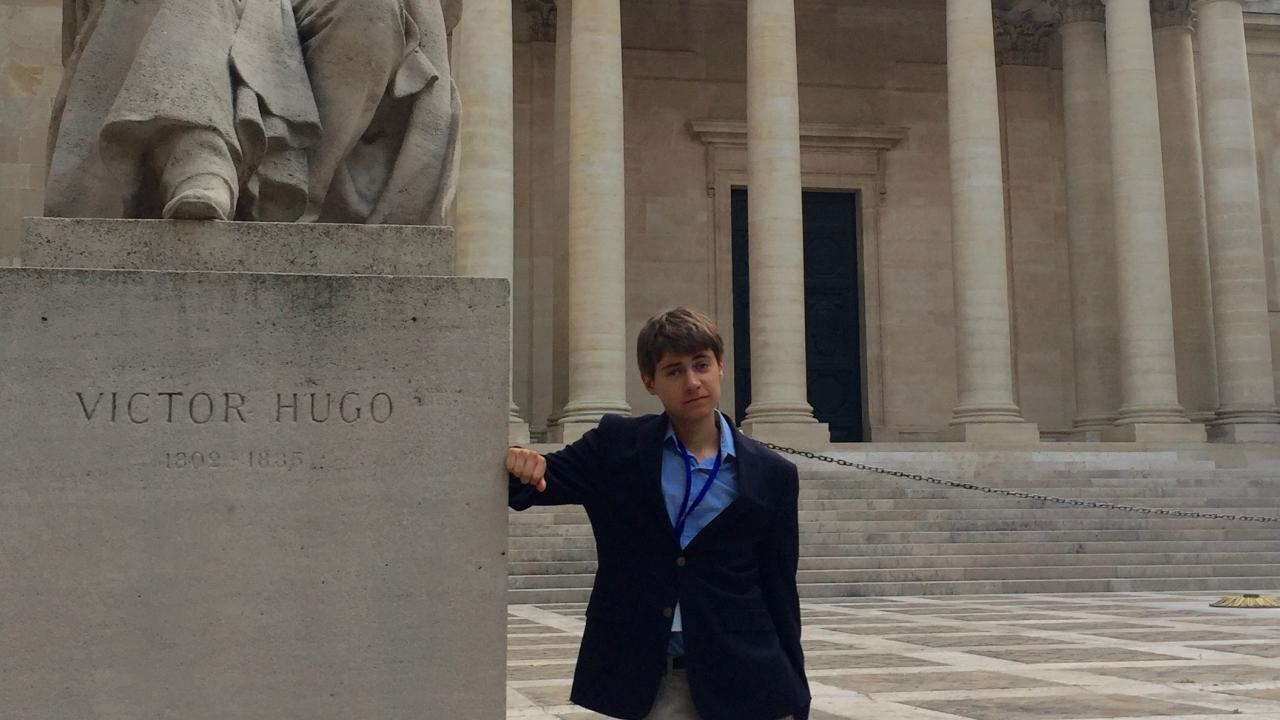 Through utilizing the small classroom experience in UHP and First-Year Seminars, Honors students are able to build connections with faculty, and future mentors, who impact their entire undergraduate research experience.

“It was a cool, crazy, unexpected, life-changing experience,” Michael P. Montgomery said with a smile on his face. He was referring to the International Hemingway Conference he attended in Paris, France, in July 2018, where he presented his research on one of Ernest Hemingway's short stories and was awarded the Frank Blake Scholarship. But it didn't start in Paris, or even in 2018. It started 5,504 miles from Paris—in a classroom at UC Davis in 2016. 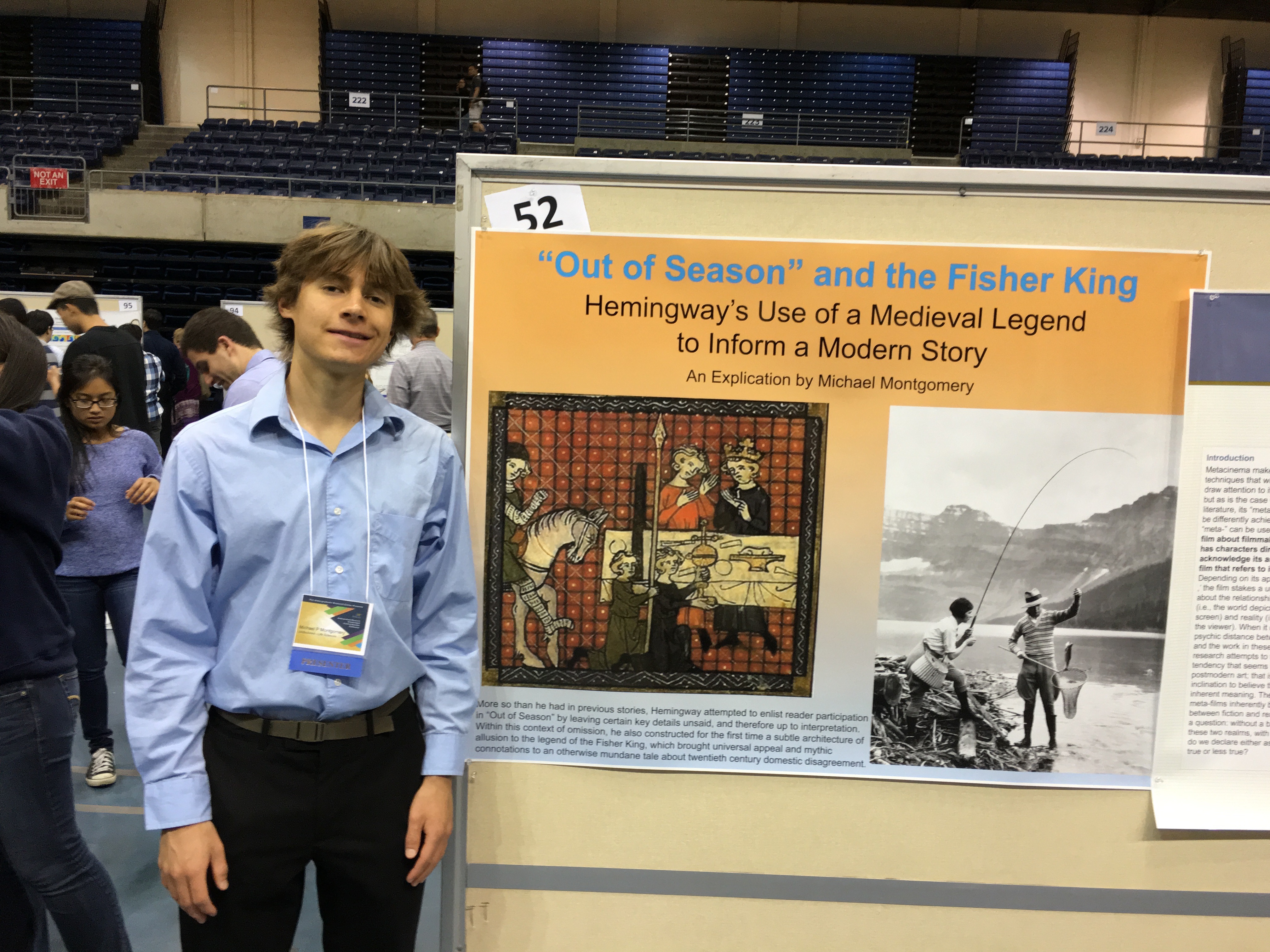 From First-Year Seminar to Published Researcher

Michael was introduced to Hemingway’s work when he took a First-Year Seminar during Fall quarter his first year. Reading Hemingway's Short Stories, an annual seminar, was taught by Professor Peter Hays, where they did weekly readings and analyses of Hemingway’s works. On a particular short story, "Out of Season," Michael pointed out the significance of a certain word, "geld," meaning "castrate" in English and "money" in German, which he called a “bilingual pun,” and which influenced how the work was read. Impressed by his essay, Professor Hays reached out to Michael and encouraged him to research this idea some more. Michael expanded it into a broader context, created a poster, and presented at the 2017 Undergraduate Research Conference, a rare accomplishment among first-year students. But this wasn’t the end.

“Professor Hays put some pressure on me to develop it into an actual paper,” Michael recounted. Michael said that the time Professor Hays invested in him was very valuable, especially considering Professor Hays is a professor emeritus. By the end of 2017, Michael had completed a draft. Hays later told him about The Hemingway Review, a scholarly journal devoted to Hemingway research. Michael submitted his research and was accepted in January 2018. When this publication came out in November of 2018, Michael was speechless. Holding a physical copy of the periodical, Michael was now a published author as a second-year undergraduate, and felt how surreal it was that other students and researchers could cite his work.

Between the acceptance and publication, Michael presented in Omaha, Nebraska in March 2018 at a conference called "You Are Here: An Interdisciplinary Conference on Place, Space, and Embodiment," hosted by Creighton University. He also presented at the American Literature Association conference in San Francisco in May 2018, where he was able to “test his Hemingway paper out.”  When it came to the Hemingway Society conference in Paris in July 2018, Michael attributed his calmness to the previous conferences he had presented at.

“It was very gradual so by the time Paris came around, I wasn’t as nervous.”

Michael said he was the youngest person at the Paris conference by far. He also received a scholarship at this conference, and his family used the event as a way to visit Europe for the first time. He even went to the Italian city where the short story "Out of Season" took place. Yet, his research career didn’t stop in Paris either. 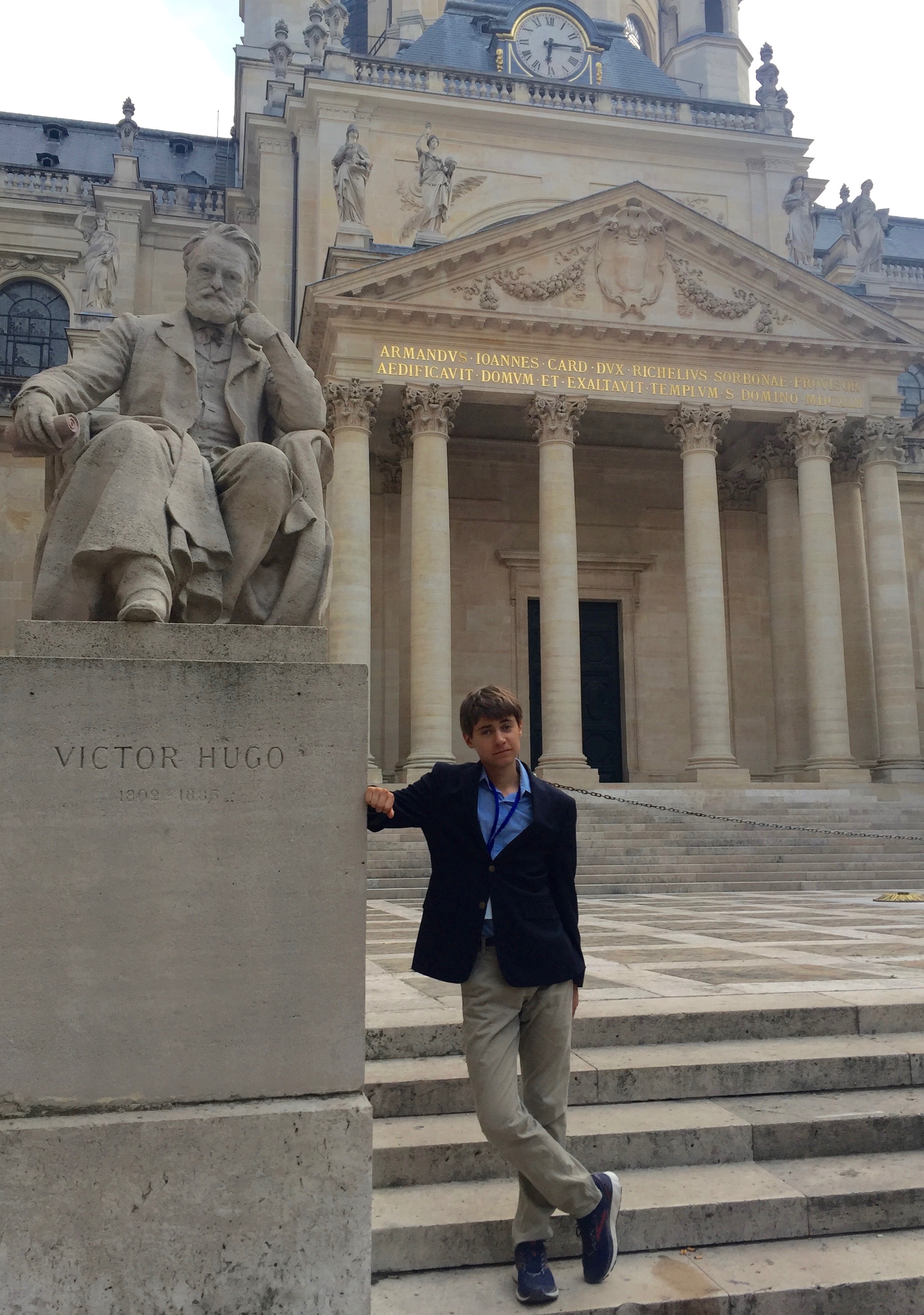 Michael posing next to a statue of Victor Hugo in the Sorbonne University in Paris, where he received the Frank Blake Scholarship.

Through UHP, he was able to do an Honors Contract with the Honors Program Director Dave Furlow, where they worked on developing interdisciplinary classes that focused on the environmental movement in America, while combining both the sciences and humanities. From this project, he was able to reach out to more professors, including another mentor—Dr. Scott Herring of the University Writing Program

In Winter quarter of 2019, Michael engaged in a second Honors Contract with Dr. Herring. He worked on an interdisciplinary project about wildlife, specifically mountain lions and other big cats, with a goal of analyzing "not only the science of mountain lions, but the place they occupy in human culture in California." Michael hopes to explore this concept more in his Senior Thesis. He was also informed about the Portz Fellowship, which focuses on interdisciplinary research, and which he applied for in the spring.

When asked if this was a hard and intimidating process, Michael said no. He mentioned how the small classrooms in UHP made it easier to know professors, making them less intimidating. He was never by himself and always had the help of professors and students throughout the entire process. In addition, the Honors Contracts that he participated in really allowed him to choose his own pace and explore new ideas directly with highly-esteemed faculty.

Michael’s main advice for those who’d like to get involved with research is to “follow your nose. Listen to your professor and ask questions.” He said to not be afraid to follow through and explore ideas, even if they aren’t related to your major. He also noted that you don’t have to be published for your research to be worthwhile, and that it is OK to just start small, such as presenting at the Undergraduate Research Conference.

“The requirements for UHP are very interdisciplinary and it exposed me to many fields. If you’re interested in doing research, don’t confine yourself. You’re not one-dimensional.”

Throughout his research process, Michael has connected with many professors, conferences, fellowships, and opportunities. He is glad that he has been able to explore interdisciplinary research throughout his college career.

Michael presented again at the 2019 Undergraduate Research Conference and is currently prepping to submit an abstract to another Hemingway conference in 2020, this time in Wyoming and Montana. Looking to the future, he would like to explore group research and gain more first-hand experiences in order to build confidence on researching independently. He’d like to continue doing research and scientific writing through his Signature Work, as well as look into research and education as a career.

The Beta Lab: A Maker Space for Educational Games

A Message to the UHP Community Regarding the COVID-19 Situation