Experiencing the Drama of Politics, Culture, and Self Through Theatre

Drama 1 professor Larry Bogad highlighted the work of Augusto Boal, an influential Brazilian theater practitioner and political activist, specifically his books, Games for Actors and Non-Actors and Theatre of the Oppressed. These books encourage members of the community to not just be spectators, but to involve themselves in the performance in order to express their perspectives of society and its limits. Using these techniques, Boal was able to develop legislation in Rio de Janeiro that came directly from issues of citizens and communities traditionally unrepresented in government. Many of the exercises are not scripted and intended to be improvisational so as to help people who do not think of themselves as actors to express themselves.

A Day in the Life of a Drama 1 Student

After a brief introduction to the concepts, students were called out of their seats and jumped into the lessons. With each lesson there would be a brief explanation by Dr. Bogad, a swirl of activity, and then the group would come back together to discuss their experience and how it related to the concepts they were learning. 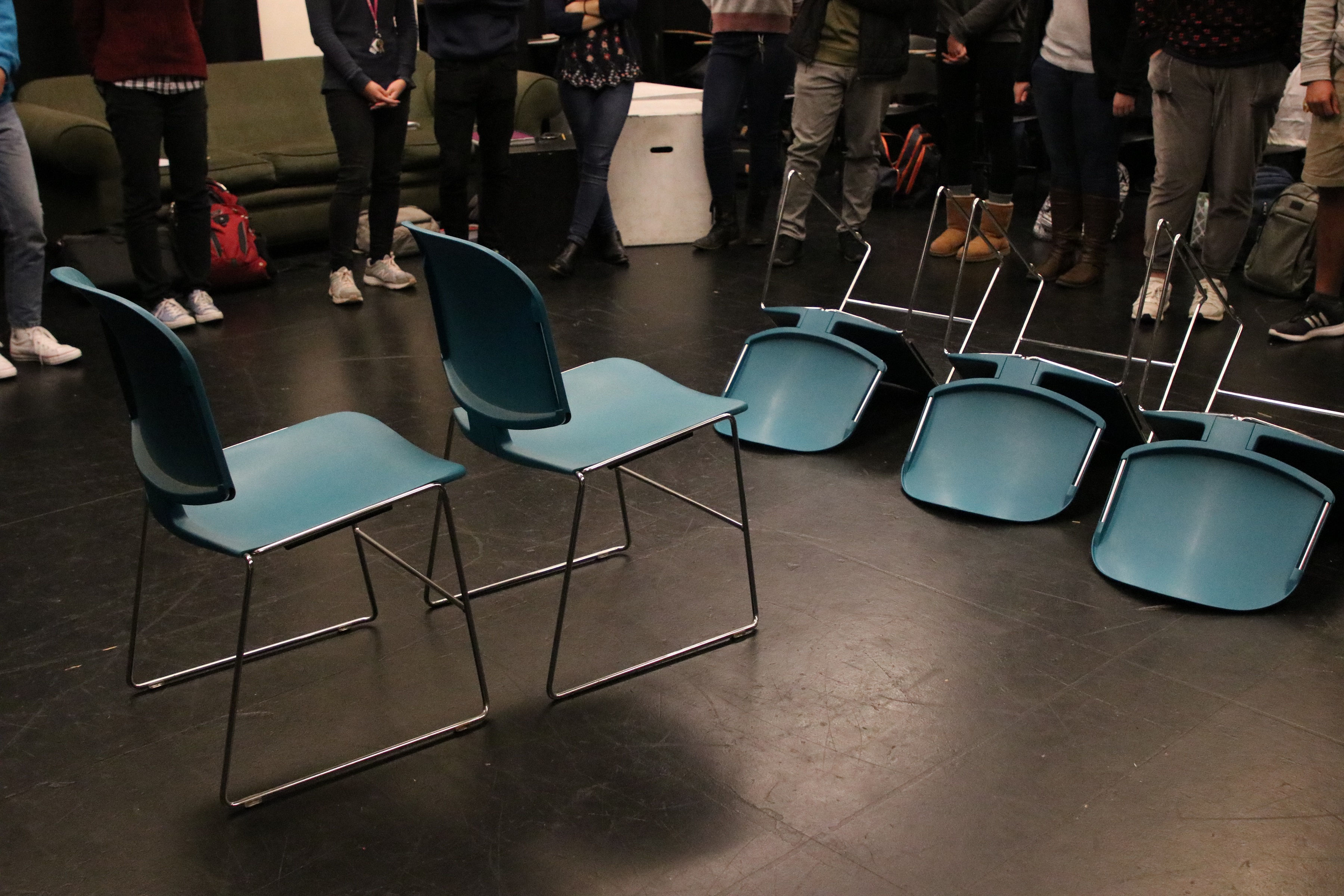 To experience the full story, check out the Power Dynamics photo gallery.

Students first began with a nonverbal exercise; to create a representation of power dynamics using only chairs. Each student would step up and arrange the chairs to tell a story. Some representations built on the previous, and some even elicited gasps as the realization hit those who were observing the silent composition come together. After a few rounds, Dr. Bogad went on to explain how Boal had used this lesson for communities that may have members who felt they could not personally express their frustrations or observations but felt more comfortable to use chairs as representations.

Next, students were paired up and instructed on how to perform “Colombian hypnosis” named for the country in which Boal developed the exercise. One student would hold their hand up in front of their partner’s face who would have to keep their face aligned with the hand when it moved, tilted, or shifted in any way. Students in the “leader” position would have to carefully make sure their partner did not run into anyone else while the “follower” tried their best to match the movements of the student’s hand. Then Dr. Bogad brought the students together for an extreme version; students were connected in an intricate web of leaders and followers. As the group moved they appeared to be almost flowing in a dance – until one student lost balance or laughed, of course.

Lastly, students came together into groups of five to six for a lesson called “Human Tableau.” Dr. Bogad would give a title to describe their tableau then each group had to form a human representation to match the title. The group could not speak to collaborate; each student would individually pose and then the next would add on to the tableau until the group came together into an image. Titles included “Family”, “UC Davis”, and “America” – all of which proved to be thought-provoking. Often the tableaus were quite cohesive, showing that the students were able to understand each other’s intentions and add their own perspectives.

View the Human Tableau photo gallery to see the human tableaus the students made.

After each lesson, instead of dissecting each piece of improvisational artwork, students decided for themselves what each piece meant based on their own subjective experiences. These lessons gave students the tools to express themselves politically and culturally in ways in which they may not have previously been able to. Each piece reflected the diversity of the students in both its expression and interpretation creating a unique amalgamation and integration of art, culture, and politics.

For the last 50 years, this integrated aspect of education has continued to shape the experiences of honors students. From Integrated Studies seminars 50 years ago to Dr. Bogad's Drama 1, our programs have provided students with courses that incorporate many perspectives that at face value may appear separate but are actually closely influencing one another. This is evident in Theatre, Performance, and Culture as students learn about historical, political, and cultural factors that continue to shape how theatre is performed and perceived.