The Beta Lab: A Maker Space for Educational Games 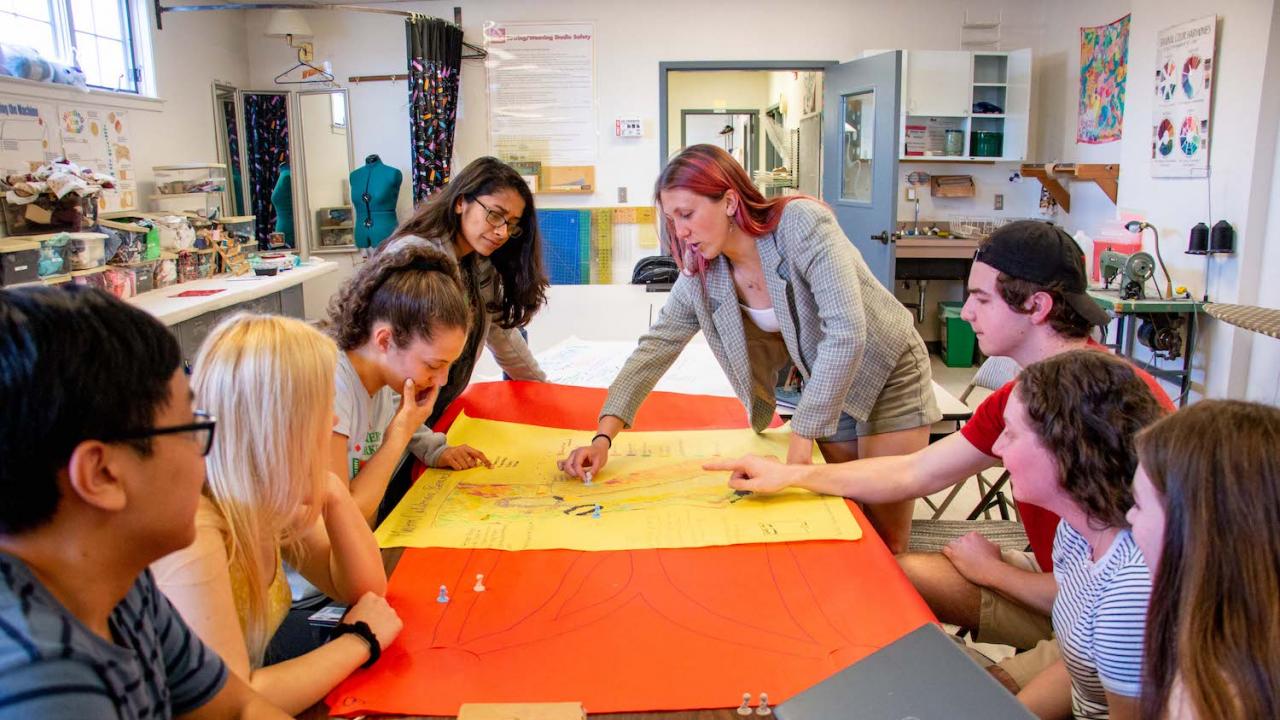 Up the stairs of the South Silo, tucked away in the Craft Center, lies the Textiles studio. A seemingly unusual spot for a class, the Craft Center is teeming with creativity and eccentric ideas and, as it turns out, is just the right spot for a course that thrives on unconventionalism: UC Davis’s Beta Lab.

The Beta Lab is a research and outreach project headed by Lee Martin, Associate Professor and chair of the Graduate Group in the School of Education, and a Chancellor’s Fellow. Martin is also an alumnus of UC Davis’s Integrated Studies program, the ancestor of the University Honors Program, which is partly how this course he came to pilot "Special Topics in Education: Design of Interactive Learning Objects" an experimental course in the UHP.

A Maker Space and Test Lab for Educational Games

The course is the first of its kind, a visionary class that is focused on interdisciplinary topics and sits outside a particular curricular sequence. That's the other piece that made it a great fit for the University Honors Program, given the UHP’s interest in piloting and incubating innovative courses that sit between disciplines. BETA stands for Build - Engineer - Tinker - Adapt, but also suggests beta testing, or active engagement by users to improve a product. The Beta Lab functions as a maker space and test lab for educational games, creating an opportunity for Honors students to work together and design an “interactive-learning catalyst” (aka game) to facilitate conversation around an educational topic.

After sharing, the students split up into their respective groups. They have spent the last 2 weeks in groups brainstorming and creating prototypes of educational games covering traditional disciplines such as music, foreign language, environmental science and history as well as more abstract topics like how one builds perspective-taking and empathy.

Dr. Martin said he hoped that the students’ primary takeaway would be “how to think about learning in terms of embodiment of the materials,” meaning that the students would develop a set of instructions that enabled people to engage in a certain kind of thinking and conversation.

“Everyone is a learner, but they don’t learn in the same ways.”

The Beta Lab permits academic go-getters an extra degree of freedom, immersing themselves in a project-based learning environment that lets them explore new connections and directions that were not anticipated.

Once everyone was in their group, Dr. Martin put the teams in pairs for game-testing and peer revision. Wasting no time, the students eagerly set up their games and passed out their instructions. One group focused on music learning with an interactive wheel designed to teach students the major scale. Another centered on environmental awareness, creating a board game with a layered map to educate players about the impact of climate change.

The room was consumed with the sounds of laughter and chatter, the students critiquing each other and working through the kinks of the games together. Dr. Martin observed each group, asking questions and offering suggestions when needed, but it was clear that the objective was to have each group take charge and communicate with each other.

“Reel ‘em in with the fun, smack ‘em across the face with nutrition.”

The Nutrition group developed a “food journey” to get children involved in cooking and helping their parents choose healthy ingredients. They created six weeks worth of meals, with the ingredients written on cards and thrown into a box in which the child would select a number of ingredients at random. The parent and child would then work together to make a meal based on the chosen cards. The group hoped that their game would encourage children to try new and healthy foods.

Some students in the groups hoped to pursue game-design in their careers, and others aimed to simply engage students in topics they did not have much experience with. Dr. Martin had left the content area open to his students; there was guidance but the students came up with the ideas themselves.

Eventually, Martin would like to take these games on the road, doing demos at area schools. Separate from the class, an NSF grant funded a Beta Lab van to take the finished games out to different schools for the intended age groups to play. But for now, testing will have to wait until the coast is clear.